Ever wondered why there is a Tiny Dot near the rear camera or near the audio jack or the front camera of a phone? Why does it look like something related to the Camera? 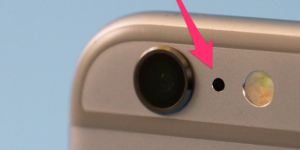 Well, The answer is it’s a microphone. Yup, It’s more than a simple microphone. In most of the smartphones, there are 2 microphones. Now, Many will ask why 2?

This helps in increasing the range of the microphone and helps the phone capture your voice while on call or while capturing a video in a better way.

Now, In the case of iPhone, This tiny hole is generally on the rear side of the iPhone. But for some phones, it is on the front side, adjacent to the front camera. This tiny hole is known as “Noise Cancelling Microphone“. Let us know in detail about this microphone.

You may call from your iPhone when you are in a fully noisy area. But the receiving end doesn’t listen to any noise. This is because of the special audio system present in your iPhone. This is known “Noice Cancellation System”.

In general, there are 2 mics, Primary and secondary. Primary is generally placed at the bottom of the phone or on top and near the front camera.

Primary is generally placed at the bottom of the phone or on top and near the front camera.

If you’re in a noisy environment, however, it also unavoidably gathers extraneous, unwanted sound.

In the case of iPhone, There is a third microphone which cancels the noise in the surrounding.

Precaution: Do not try to poke a pin in it and find out what it does. People regret it afterwards!!!