Android Emulators are used by many in their daily lives to access Android applications on their PCs’. There can be many valid reasons to use one

Maybe you are someone who is switching from iPhone to Android, or merely want to test out some Custom ROM, its possibilities with Android Emulator are always boundless. While BlueStacks has always topped the list of emulators for PC. Doesn’t matter if you use one or not. Tricky Bell has brought a list of 10 Best Android Emulators for your PC.

10 Best Android Emulators for your PC.

Most commonly used Android emulator is Bluestacks. It is absolutely free to use but still, you can pay $2 each month for some added benefits. There is a complaint with Bluestacks that it can feel a little heavy at times but the 2018 edition tried to fix all downfalls. You can multiple games at once or vice versa and features like this make it the heaviest emulator on the list. But still, based on graphics, interface, features, and settings; its the best you can get free. The latest updates have introduced Nougat, one of the first emulators to do that and has worked on speed management making it decent even on older systems.

Bliss is little different than its other competitors, It works as an emulator for PC as a virtual machine. It can also run on your system through a USB stick but that process is complex due to the installations. This makes Bliss a very unique in our list of 10 Best Android Emulators for your PC. It runs on Oreo OS which may get bit free sometimes. It’s absolutely free.

Next on our list is Koplayer which is one of the latest emulators. It has managed to fly under most radars until now. Its main focus is for gaming. You may use key-mapping to emulate a controller with the keyboard. Players can record and post gaming clips. It is also a good option to test productivity. it’s free.

This is no traditional emulator, ARChon is installed as a chrome extension. From there you can download and install APK’s to give Chrome the ability to run Android apps. There are a lot more steps to make this work than any other Android emulators. On the other side, it works with any operating system that can run an instance of Chrome (Mac OS, Linux, Windows, etc). It is mostly free with some added paid benefits.

Made mostly for developers, Genymotion helps you run your apps on different platforms and devices without owning them. It can replicate different OS like Android 6,7 etc and many devices too. You can always switch between virtual machines with ease. Those without powerfully strong specs Pc’s can let servers do the work. It is mostly free with some added paid benefits.

Memu is a rising emulator for gamers. It’s the biggest merit is to support both  AMD and Intel chipsets. Also, it supports Android Jelly Bean, Kit-Kat, and Lollipop. You can even run multiple instances at once for multiple games or testing features like BLiestacks. It’s free of cost.

PrimeOS is standout emulator without being an actual emulator. It acts as a partition, boots up as a separate Android system. Though it is gaming focused, you can use it for many purposes like productivity. It is new and is from Indian based startup. It is free too. 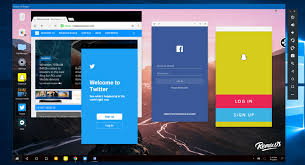 Remix OS player is pretty new to the list and runs on Android Marshmallow. Though the installation process is pretty simple it hasn’t received any major updates lately and the site runs slow. It has got gamer-specific features along with a customizable toolbar. Remix OS player boasts features like running multiple games at a time.

It is an IDE similar to Android Studio. Xamarin can be plugged in Microsoft Visual Studio for larger development variety. It comes with a built-in emulator for the app or game testing.  It isn’t as powerful as other emulators. Other Companies and larger teams may have to negotiate a payment plan.

Nox is an Android emulator for gamers. It includes all stuff like key-mapping with your keyboard, actual controller support, and even the ability to key-map gesture controls and more. It is free and under active development as in yet.

Though there are certain downfalls of emulators like lacking the real-time scenarios, or actually getting the device-specific problems like the look and feel or the resolution of the screen. Since the hardware isn’t completely the same hence it fails to show you the performance issues if used 15 hours at a go and etc. Most of which are related to the testing department.

Also for gamers, there are few companies or leagues which ban the use of emulators ro enhance performance so that fair chance of playing is maintained.